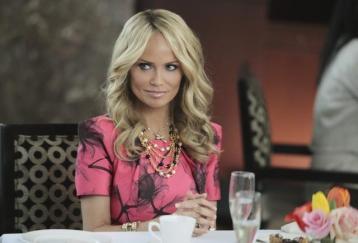 it’s finally here, the show that has caused so much buzz is finally out there in the world. GCB or (Good Christian Bitches) debuted its pilot last night on ABC. I’m sure everyone across America already knew about it, given its name sake. The title for the show had people more than talking, in fact protesting. ABC even changed it to Good Christian Belles, before finally censoring the title to three bold letters. interesting fact, this show aired in multiple countries around the world, and oddly enough it’s country of origin is the only country to censor the title. Like they say, no such thing as bad press, clearly GCB got all kinds of it.

Like it or not, we in DFW, were buzzing as well. If you havent yet seen that Fab billboard on N75 featuring Carlene Cockburn (Kristin Chenoweth) your missing a true “Blessen”! And yes I know, we Dallasoians have seen our fair share of stereotypes being thrown at us from every angle. However when the makers of Sex and the City and Steel Magnolias, broke news that their next project was based in our beloved metro, I couldn’t help but get a tad excited. Who better to produce quotes that are drenched in southern comfort.

The show Based on the book by Kim Gatlin, titled as it’s real holy glory name, follows the return of Amanda Vaughn back to Dallas after the death of her embezzling husband who left her broke. however it seems karma aswell is following the show’s starlet, as she reunites with her neighboring mean girls out for revenge. “Doesn’t it just reek of Southern hospitality!”

As America feasts their eyes on the show, we Dallas folk are loving the attention to detail the show is researched, The JOHN 3:16 Bently was the shows first unforgettable moment, and long behold, stuck right in the middle of that windshield was the blessed Dallas TOLL TAG, priceless! I live for those kind of moments, not to mention the other little hidden details, such as their “HILLSIDE PARK” community, which is a nod to our real righteous community “Highland Park”, and the star detail of last night’s pilot, had to be the Butterfly Neiman Marcus card, come on that’s brilliant! Speaking of style, the wardrobe was eye candy to say the very least, kudos to the shows costume designer Ellen Mirojnick.

Well, im hoping GCB lasts a good while on TV, given its “OK” start with 7.6 million viewers according to Entertainment Weekly. I will say, after the pilot I found myself hooked, I am equally hooked to GIGI played by Annie Potts, It might just be DFW’s newest guilty pleasure. Even though every five minutes a stereotype falls out of someones fab mouth.

Our town is buzzing, GCB clearly is a show that you either love it, or hate it, so im dying to know which is it? I know they have my endorsement.

as for now, im off to buy the book, which should keep me grounded till next sunday show.