Much Like Splinters of the true Cross, a relict of any kind has the Presence of a time gone by, a time capsule waiting to be opened, Which rings true of a very special find with a romantic  and not to mention spooky nature.  Alexander McQueen and his maniacal ways never  came short of shocking  the fashion world time and time again, however some of his  old tricks, habits, and artfully surreal practices left the designer long before he became Alexander McQueen, many of the most notable and at times questionable practices  where  sewn together when our legend of fashion rebellion was still known as ’ Lee McQueen. ‘

Just Recently, I had the pleasure to receive a tip of  a treasure that had been discovered, the treasure not knowing what it could have been, in fact all i knew was that it had something to do with  the late designer and it had been discovered at our very own Fashion Mecca, Uptown Consignment Fine Apparel,
truth be told i  was actually anticipating a pair of Armadillo Shoes which  i have been on the hunt for since the Plato’s Atlantis Show, I had made up my mind that if that elusive pair of the last realized collection of the Late rebel  where in my presence I would purchase on the spot, but what was presented to me instead was far beyond what could have been expected.

Uptown Consignment Fine Apparel, now made famous due in part to BIG RICH TEXAS, and without a doubt the store packs a mighty punch for us fashionistas in search of the Holly Grails of Fashion. The upcoming Jean Paul Gaultier Exhibit ,that is fast approaching our BIG & RICH City, has every real housewife in an up roar to search for a Vintage Piece, leaving much McQueen items up for grabs. Among all the treasures of The shop the Alexander McQueen pieces which our contained in this Fashion House of Worship, was extremely overwhelming, especially  for the new piece in which they have in their beloved possession.

All the Alexander McQueen  News that has been circling around the the most successful exhibit, Savage Beauty , in MET History, that people  like myself who were so unfortunately unable to attend, would jump and any chance to examine the works one on one. Among the Stunning Collection of vintage pieces that, after an estate sale of a wardrobe  that measured 2,500 sq ft, Uptown Consignment uncovered a piece that is among the rarest. 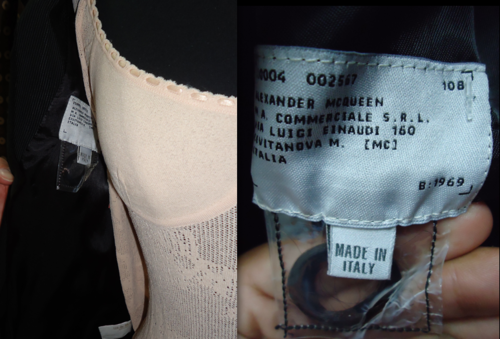 It has been known, that among the many beliefs of the late visionary, that hair was symbolic feature of the human form that the designer celebrated. In many beliefs hair was a symbol of love, for it held the power of love through the scent of the its pheromones. True to forum the designer, as the King of fashion rebellion, instead of having a Label attached to his work,  at times, the designer would sew a lock of hair in a clear packet within the lining of a piece. This practice for the designer dates to to his early work as back as 1994.  The use of hair was a charm of good luck and fortune, the early works were actually known to have been locks of his own hair, through the years he would use the hair of  personal friends of his, such as the late Isabella Blow.   I myself  had herd of the hair label, however never seen a piece, which lead me to the belief it was all a myth, Much like in Sex and the City, when Carrie gets to peak into the VOGUE archive closet and discovers the Urban Shoe Myth that was the Manolo Blahnik Mary Jane, i was besides myself with this treasure.

I cant help but relate to the small chapels around the world who receive a gift from the Vatican Archive, that gift being Splinters of the True Cross, from that moment on those small chapels around the world become a holly place. This lock of hair within a Vintage McQueen suit may not exactly be biblical, “WELL” maybe just a tad, at least to  us Fashionistas who enjoy the excavation of relics from Fashion Moments gone by. I also cant help but think of the other  treasures that late housewife had in her 2,500 Sq Ft. Archive, what other pieces will Uptown Consignment Fine Apparel find, what i do know is that Uptown Consignment Fine Apparel among the other great finds they posses, is a TRUE fashion house of worship with a Relict of The True McQueen.

It is still undetermined if it will be for sell, The owners of Uptown Consignment Fine Apparel  do want to be absolutely certain that this relict of fashion history will go to someone who understands the appreciation of wearable art, and respects the importance of this rare find. Stop in anytime to see their assortment of McQueen among the other great designer names. 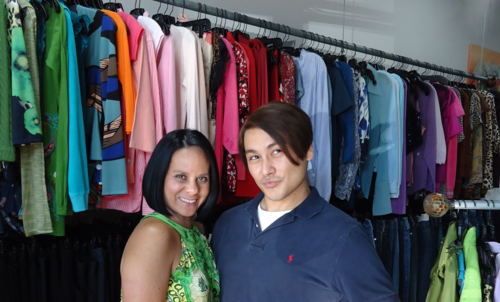 Special Thanks to Camille Umland of Uptown Consignment Fine Apparel,