Gianni Versace, with one name can conger up many things, from silk Baroque shirts,Greek Mythology, and one city, Miami. The Versace name, in no doubt, has always had the allure of over the top lifestyles that only Caesar himself could have lived. Through the Vibrancy, the Vitally and of course the Vision, that is Versace, we still in all respect crave the lifestyle that our Gianni and Donatella have shown us year after year.

Fall-winter 2011/2012, Donatella Versace showed a collection that to many coined it the Resurrection of Gianni Versace himself. The black and gold motif adorned with the ever-famous Medusa medallions from head to toe, was undoubtedly the mark of our opulent and missed designer. The sense that the DNA of the brand was slowly coming fourth to become yet again a trend in the present day fashion, was as exciting as hearing that Versus Versace as well had its own resurrection. The air is rich with Versace, it almost feels like its 1992 and the excess of the 90’s are exactly what this post recession country needs.

Donatella Versace, post the demise of her brother Gianni, took the rein and transformed, Gianni’s Versace, into her very own. Through the years, Donatella had stayed true to her brother’s vision and kept the brand a force in the industry. 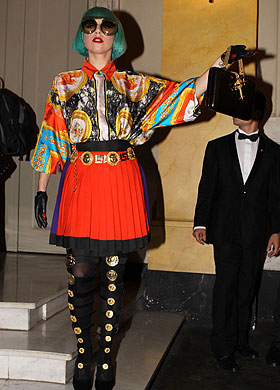 The 90’s are just in that grey area of the past, that may not exactly be vintage, and maybe a tad to soon to revamp, but I cant help but wonder, are we in such need of excess that we may actually be rushing the trend back to our wardrobes? After all if you want a life of excess only one could have supplied us with it, Gianni.

So it comes as no surprise that our lady of gaga has done it again. The mistress of fashion is tapping into the Versace Archive and re-personifying the image of luster and over the top excess that can only push us to the edge of glory. It has been rumored that Gaga’s Versace re-invention took a lot, after all the Gianni Versace Archive 1992-1997 has not been opened in 14 years.

The Versace medusa medallions and the gold studded leather vests were the featured looks in Atelier Versace spring summer 1992 collection, however Gaga’s new video is not the only Versace visuals she so eloquently fashioning. For months now our Lady has been seen around many of city, all over the world, showing off those medallions, crystalized seashells and the gold baroque silk shirts. The Archive has been opened and it seems that a Versace craze is happening.

The excess is back, the opulence that only one man could have envisioned and a sister to adorn it. Maybe Donatella Versace was teasing us with her most recent collection. What this means in fashion, who knows?, but the over the top glitz and glam of Gianni’s Versace is back, and our lady of gaga is pushing us right over the edge.