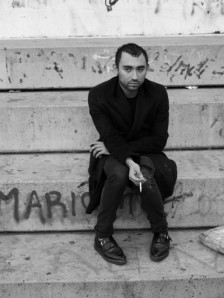 After baring witness to the MUGLER live stream Last evening, i have come to the conclusion that fashion is now really back. Fashion has long lost it’s luster; A luster that even though physically present in fashion, the shows where dwindling in the twilight of a post recession world. Even the News that one of the last remaining Show stoppers in fashion, Monsieur Galliano, got the boot. With all things changing in Paris…it seems everyone is cleaning house now with the speculations that DIOR had strategically planned the elimination of Galliano. Which had given that Coach, Gucci, as well as French VOGUE have been doing the same. What could one even look forward to during Paris Fashion WK, now that Galliano wont even be present on the upcoming Dior show!

Then out of no were Nicola Formichetti, who not only is the famous or rather Infamous Director of the GAGA videos as well as the Lady’s Fashion Director at the Haus of GAGA, and!  the fashion director at Vogue Hommes Japan. This guy’s resume reads like a fashion BIBLE.

Now serving as The Creative Director of a House that was equally famous for show stopping Fashion, much like that of Galliano’s Dior. Thierry Mugler or now known as the House of MUGLER, presented a menswear collection that was shocking, sexy, and chic. The featured model at the menswear show was Front IT boy Rick Genest, the tattooed subway kid, now for women’s last night, GAGA herself was the featured Monster. Aside from GAGA modeling and GAGA’s Album being sampled through out the entire show, the show itself was AMAZING! The Thierry Mugler WOMAN has ironically been RE-BORN. 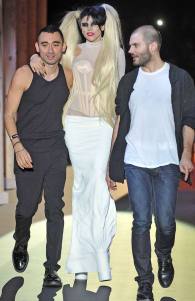 Yes i do admit commercialism has seeped into the house, BUT the wow factor is ever greater, now made for everyday women. Formichetti being what he is today is the perfect fit for the shoes left behind my Thierry Mugler himself. MUGLER F/W 2011 stands to be the show stopping distraction Paris needed. The collection has the allure and appeal that shows have lost throughout the years. The only Exposure to MUGLER thus far was SASHA FIERCE, and now its back. Even the two models who tripped during the show didn’t even phase the crowd, in-fact added to the reality that real people are meant to wear this. This is not COUTURE its PRET-A-PORTER, its an absolute HIT.